Mamata has no sympathy with the untouchable Bengali Refugees and simply forgot Marichjhapi Genocide! Palash Biswas

Mamata has no sympathy with the untouchable Bengali  Refugees and simply forgot Marichjhapi Genocide!

Mamata Banerjee constituted no less than 14 commissions to investigate genocide cases in Bengal.Way back in 1971,during Congress rule,mass killing was witnessed by the people of Bengal all on the name of curbing Naxal movement.Didi`s commission is investigating that case also not to mention the cases in which the Left is alleged to be involved.

However Didi did not order any investigation in the Marichjhapi genocide case in January 1979.

It is very very important that during last Assembly elections,Mamata and her party TMC used the film on Marichjhapi at large scale to mobilise SC,Bengali refugee and specifically refugee vote bank whose kith and kin were killed in the sundarbans island who came from central India refugee colonies and camps invited by the Left.

Despite law amended police and security forces have every right to indulge in gangrape in entire northeast, central india, Gondwana and Kashmir! What about that?

Women had been raped and children were killed in Marichjhapi,too. Three decades past,no answer from the ruling hegemony and progressive Bengal remains silent.

We always stand united with you!

As you have been associated with mass movements and people`s resistance against all cases related to Human and Civil Rights in this part of the Globe, you are well aware of Regimented Gestapo, Global ruling class and Ruling Hegemony in West Bengal and India.

We have no space for democratic process or freedom for expression.

During Left rule in Bengal, so called proactive Judiciary was well exposed with the High court judgement justifying indiscriminate land acquisition in Singur! Nandigram had been captured as well and Nano had become the best Icon of sensex shining NRI MNC India.

You may well be aware of the Marichjhapi massacre just after the Repression of Naxalite Movement and Liberation of Bangladesh!

All these episodes not only coincide but are interrelated with Grand Power Bargain and Population Transfer Holocaust in the best interest of the Indian Ruling class.

Meanwhile, as a fallout of Emergency, the election equations changed dramatically in 1977 and Marxists got hold of state power in West Bengal. Refugee influx was managed by the Marxists but the immigrants refused to come under the Marxist umbrella!

Marxists did not need them anymore as they captured SC ST OBC and Minority Vote banks. But the refugees managed Marichjhapi into a self sufficient Economy and society without any government or political help. It was great headache as that could invite further refugee influx disturbing the set up vote bank already.

Jyoti Basu and his deputy Buddhadeb liberated Marichjhapi with surgical precision blocking the island , cutting off food and water supplies and using local goons and party cadres and panchayats to eject out the Refugee resettlement! Mass killing,Arson, Gang rape, Police firing, Water poisoning, Biological weapons , everything done with stopping Press, Political parties and civil society to enter into the area. Dead bodies were neither cremeted , nor engraved but were disposed off in the core area of Tiger Project to feed the Royal Bengal tigers! children burnt alive in scores!

Marichjhapi was never under Forest Area and the Refugee Settlement never disturbed the Nature, Environment or Life Cycle in the Mangrove Heritage! Local bodies and local people cooperated them and it annoyed the gestapo!

All these years, Serials of Genocides were enacted in this Humanscape without any trial, any hearing under circumstances of inherent inequality and injustice!

Resistance against SEZ, PCPIR,Nuclear Plants, Big dams,Strategical regrouping, Neoliberalism, Globalisation, Retail Chain may be Impossible without the prosecution of the killers of Marichjhapi and Nandigram!

Mamata Banerjee led the anti land acquisition movement in India which elevated her status as the Chief Minister of Bengal.

Mamata misused the Marichjhapi and remained always as detached as Bengal leaders have been as far as the plight of East Bengal partition victim untouchable is concerned.

Mamata proved it beyond doubt.

Thus,in a huge embarrassment for the Left Front, a Commission of Inquiry into the police firing on a Youth Congress movement in 1993 killing 13 persons on Monday said that it was worse than the Jallianwala Bagh massacre. While ordering a compensation of Rs 25 lakh to the families of each of those killed, the one-man Commission of Justice (retd) Sushanta Chatterjee said that control room officers were "vicariously responsible" and "overacted to please their political bosses".

"There was no necessity to resort to firing that caused the death of 13 persons," Justice (retd) Sushanta Chatterjee of the July 21 Commission, set up by the Mamata Banerjee government soon after coming to power in 2011, said.

"This incident was much worse than what happened in Jallianwala Bagh," Chatterjee said. Seventy-five rounds of bullets were fired by the police in the incident, which had caused a nationwide uproar during the time.

Noting that the victims or their families were financially handicapped and of economically unsound background, the Commission ordered a compensation of Rs 25 lakh to the families of each of those who died and Rs 5 lakh each to those who were injured in police action on the fateful day.

The Commission said, "The control room officers were vicariously responsible and liable thereby."

"Without mentioning any individual name," the Commission found, "the officials in the Home department and police officials of Control Room (Kolkata Police) failed to discharge their duties in saving lives guaranteed by the Constitution and in protecting the right to demonstrate peacefully."

"Collective responsibility lies with the state and police administration, they had overacted to please their political bosses. The firing could have been avoided," he said. "Firing had happened on orders from control room and by trigger-happy additional forces sent by it," Chatterjee said reading out portions of the over 700-page report, which he made public before submitting to the state government.

Mamata Banerjee, who was the then Youth Congress president, had called a 'march to Writers Building' (state administrative headquarter) on July 21, 1993, demanding mandatory use of voter identity cards for exercising franchise alleging that the CPI(M)-led Left Front indulged in large-scale rigging of elections.

The Jallianwala Bagh massacre had taken place in Amritsar on April 13, 1919. Approximately 1,650 rounds were fired that resulted in the killing of more than 1,000 innocent Indians besides leaving more than 1,100 injured. 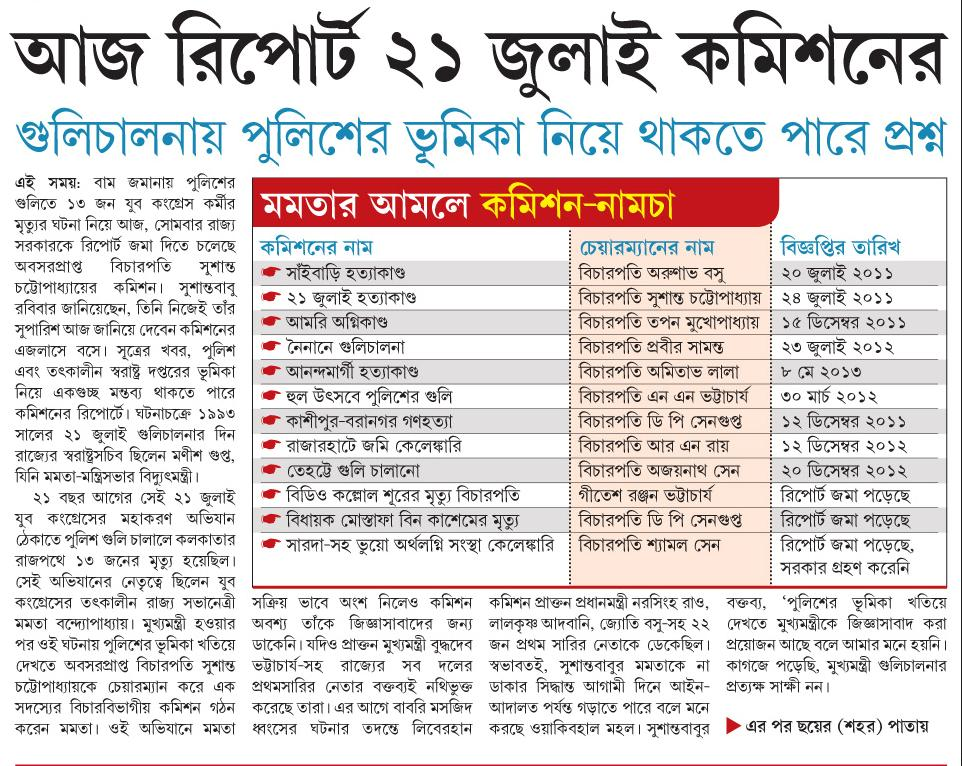