Special panel to speed up land acquisition and the next ordinance is about land! Let us enjoy that the free flow of abundant foreign capital is ensured as never before and we may convert ourselves into a prosperous Hindu Nation killing all the refugees,the peasantry,the refugees,everyone non Aryan along with Indian business and industry! Palash Biswas

Special panel to speed up land acquisition and the next ordinance is about land!

Let us enjoy that the free flow of abundant  foreign capital is ensured as never before and we may convert ourselves into a prosperous Hindu Nation killing all the refugees,the peasantry,the refugees,everyone non Aryan along with  Indian business and industry! 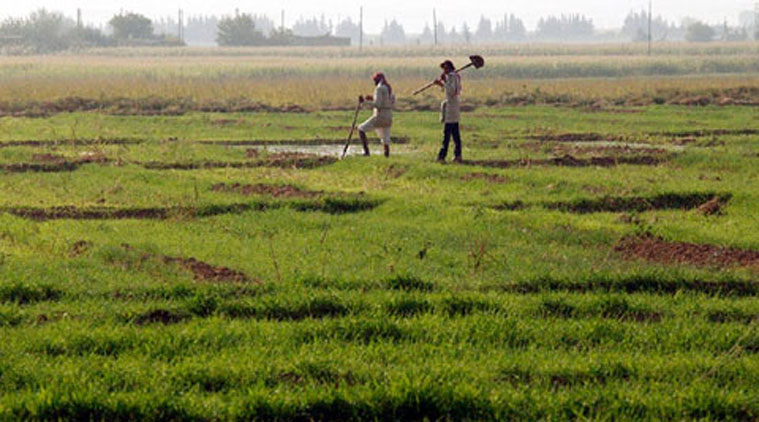 The government is seriously considering an ordinance to effect the changes.Indian Express reports.

Once labour reforms endorsed by the parliament,the workers have no space whatsoever to lodge the complaint.No body is ready for any hearing whatsoever as the parliament is scientificlly bypassed again and again and the billionaire millionair ruling hegemony is working with best ever killing instinct to make Barack Obama happy as everyone has to sustain himself in politcs with corporate funding and has to oblige corporate lobbying so intensive.Hence,the democracy is admitted in intensive care unit where it should prove to be live and active.That i it.

Good days confirmed for the rural India as they might opt for the cemented Jungle instead of harvesting so hard and fall in debt trap.

The ordinance is the last option for Modi just because the government headed by Narendra Modi could not Overcome Dr.Manmohan Singh branded policy paralysis and could not drive reform express out of the Parliament which was engaged in a rather unfamiliar storm created by Hindutva conversion campaign resultant in ethnic cleansing.

After yet another winter session of Parliament was washed out, wherein the Narendra Modi government failed to pass crucial economic reforms, it is now planning the ordinance route to make changes to the Land Acquisition Act.

Government sources have told the Indian Express that necessary directions have been issued to the Rural Development Ministry to get the draft ordinance vetted by the Law Ministry. Sources said that Cabinet approval could be taken as early as next week for making changes to the Right to Fair Compensation and Transparency in Land Acquisition, Rehabilitation and Resettlement Act, 2013.

The extremists saved the government in India in the Parliament with the delayed timing of the genocide which killed tribal women and children as RSS replicates Gujarat in Assam with its salawa judum civil war tactics.

The incident coincidentally took place just after the witer session was over.We never know whether the timing is also planned strategically and the Extremists had enough enough time for the kill and escaping thereafter.Army action could not save the innocent humanity nor it is intended.

Let us enjoy that the free flow of abundant  foreign capital is ensured as never before and we may convert ourselves into a prosperous Hindu Nation killing all the refugees,the peasantry,the refugees,everyone non Aryan along

with Indian business and industry!

The happy new year seems to be the carnival of ethnic cleansing as Assam has exposed.

We may not protest just because the popularity the PM got with his Hindu Imperialist mission supported, endorsed and branded by the children of neo liberalism who preferred Sunny Leone number as one icon to the heart of the hindutva!

It is the free market economy all about.

For which Finance Minister Arun Jaitley expressed the hope that hiking of the foreign investment cap in the insurance sector to 49 per cent, which has been pending since 2008, will result in capital inflow of $6 billion.

"The Ordinance demonstrates the firm commitment and determination of this government to reforms. It also announces to the rest of the world including investors that this country can no longer wait even if one of the houses of Parliament waits indefinitely to take up its agenda," he said.

The Insurance Laws Amendment Bill, 2008 could not be taken up for discussion in Parliament despite being approved by the Select Committee of the Upper House because of the uproar over the conversion and other issues.

The Coal Mines (Special Provisions) Bill, 2014 has already been approved by the Lok Sabha during the session but could make no progress in the upper House. The re-promulgation of ordinance on coal will facilitate e-auction of coal blocks for private companies for captive use and allot mines directly to state and central PSUs.

Liberalising of the FDI policy for the medical device segment in the pharmaceutical sector is expected to help attract more investments and boost the domestic manufacturing.

Thus,here it is at last boosting the selling  off the Nation as Government is understood to be working on bringing an ordinance for changes in Land Acquisition Act enacted during the UPA rule.

Rural Development Minister Chaudhary Birender Singh held a lengthy meeting with his ministry officials today as the government is said to be speeding up the process to bring the ordinance.

The decision to adopt ordinance route is understood to have been taken after government failed to amend as many as 13 central pieces of legislation to bring their R & R (rehabilitation and resettlement) and compensation provisions ot par with those of the new Land Acquisition Act on buying land across the country, sources said.

The Right to Fair Compensation and Transparency in Rehabilitation and Resettlement Act, 2013, which came into force on January 1, 2014, had specifically said that the 13 existing central pieces of legislation including the Coal Bearing Areas Acquisition and Development Act, 1957, the NationalHighways Act, 1956, and the Land Acquisition (Mines) Act, 1885 have to be amended within a year to bring them on par with provisions of the new legislation.

However, the concerned Ministries including Railways, Power and Home did not work to amend the law as mandated by Section 105 (3) of the new law.

The other laws which were to be amended including the Atomic Energy Act, 1962; the Indian Tramways Act, 1886; the Railways Act, 1989; the Ancient Monuments and Archaeological Sites and Remains Act, 1958; the Petroleum and Minerals Pipelines (Acquisition of Right of User in Land) Act, 1962 and the Damodar Valley Corporation Act, 1948.

The Electricity Act, 2003; Requisitioning and Acquisition of Immovable Property Act, 1952; the Resettlement of Displaced Persons (Land Acquisition) Act, 1948 and the Metro Railways (Construction of Works) Act, 1978 were also to be amended as mandated by the new Land Acquisition Act.

Under Opposition fire for promulgating three ordinances less than 24 hours after both houses of Parliament were prorogued, the Centre is planning to take the ordinance route once more to effect crucial changes to the Right to Fair Compensation and Transparency in Land Acquisition, Rehabilitation and Resettlement Act, 2013.

Sources in the Prime Minister's Office told The Indian Express that with Assembly elections in Jharkhand and Jammu and Kashmir over, the government is seriously considering an ordinance to effect the changes.

Failing to get most of its investor-friendly and reform-related legislation passed in both houses of Parliament due to repeated disruptions — these were mostly over the controversial statements of senior RSS and BJP functionaries, including a minister — the government has turned to ordinances to signal that it means business.

A senior government functionary said "necessary directions" have been issued to the Rural Development Ministry to get the draft ordinance vetted by the Law Ministry so that Cabinet approval can be taken early next week.

"I think the draft ordinance will be taken to the next Cabinet meeting for clearance," the source said. Asked if the government would be able to get the amendments cleared in Parliament, the government functionary said, if required, a joint session of both houses will be convened to push it through.

The reason for bringing in an ordinance is Section 105 of the Act which provides for excluding 13 central legislation, including Land Acquisition (Mines) Act 1885, Atomic Energy Act, 1962, Railway Act 1989, National Highways Act 1956 and Metro Railways (Construction of Works) Act, 1978 from its purview.

"The Act came into force on January 1, 2014 but unless an ordinance is issued before January 1, 2015, these 13 legislation will also come under the purview of the Right to Fair Compensation and Transparency in Land Acquisition, Rehabilitation and Resettlement Act, 2013, something that the government can ill-afford. That is why we are trying to hurry up," the official said.

It is learnt that the proposed ordinance could also take large infrastructure and PPP projects out of the purview of the clause in the Act pertaining to social impact assessment (SIA), which is mandatory and has to be completed within six months.

Finance Minister Arun Jaitley and some other senior ministers of the view that this clause causes huge delays in land acquisition.

However, according to sources, there is still no unanimity on amendments pertaining to doing away with the consent clause completely or keeping it to minimal. Currently, prior consent is required from 70 per cent of the affected families if land is being acquired for PPP projects and from 80 per cent in case of private companies.

Even as it probes allegations of corruption in irrigation projects during the Congress-NCP regime, the Devendra Fadnavis government in Maharashtra has an equally big issue to take care of. Several dam projects are on hold due to confusion over the compensation package offered against acquisition of land.

"There is a big difference between the compensation provided under the centre's new Land Acquisition Bill or the state's previous model and the market price. This has caught the farmers in a bind," said a senior state official.

The delay in land acquisition has affected many projects, throwing deadlines out of gear.

The worst affected are dam projects in the Vidarbha belt where the backlog of irrigation work is already high.

A performance audit by the Comptroller and Auditor General of India (CAG) earlier had revealed a cost escalation of over Rs 47,000 crore in 601 ongoing irrigation projects.

A senior official said the cost escalation scenario was expected to worsen further if the land acquisition puzzle was not solved soon.

Expressing concern over the state of affairs, Fadnavis Wednesday appointed a special panel comprising senior bureaucrats to evolve a uniform policy for acquiring land for irrigation and infrastructure projects. Additional Chief Secretary (Planning) KP Baxi will head the panel, which has been asked to submit its report within a month.

Continuing with its policy to disband non-officio panels formed during the previous Congress-NCP regime in Maharashtra, the Devendra Fadnavis government Wednesday scrapped the Consumer Welfare Advisory Panel. The food and civil supplies department, which issued orders in this regard, has said the panel failed in its primary responsibility of "taking steps to spread the consumer movement". The previous government had appointed Thane-based Suryakant Gawli as the panel's chairperson in August 2014. The government orders said Gawli's appointment would also come to a naught with the scrapping of the panel.