Good days tell on the health of the Indian People! Modi asked for drastic cutback of health care to boost exclusive economy. Despite rapid economic growth over the last two decades, the Indian government spends only about 1% of GDP on public health. By comparison, the US and Japan spend 8.3%, while Brazil and China spend 4.3% and 3% respectively. Palash Biswas

Good days tell on the health of the Indian People! 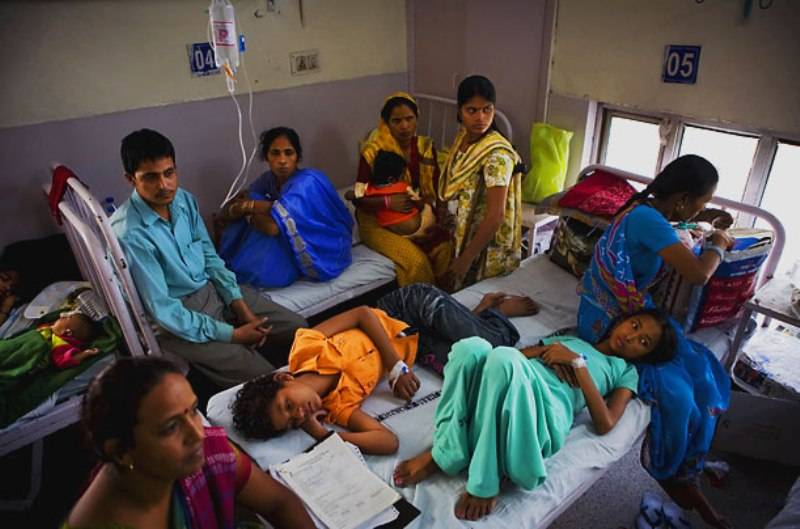 Good days tell on the health of the Indian People!Indian Prime Minister Narendra Modi has asked officials to rework a policy that aims to provide health care to a sixth of the world's population, after cost estimates came in at $18.5bn (£12.5bn, €17.1bn) for five years.

India's health ministry proposed rolling out the so-called National Health Assurance Mission – designed to provide free drugs, diagnostic services and health insurance for the nation's 1.2 billion people – from April 2015, and had projected its cost at $25.5bn over four years.

But New Delhi thought that was still too much and asked the ministry to revamp the policy, but work is yet to start, the new agency added.

That figure is about 2% higher than the current year's revised budget of Rs.290bn.

Whereas,Modi's manifesto ahead of the election that brought him to power last year accorded "high priority" to the health sector and promised a universal health assurance plan. The manifesto said previous public health schemes, that have been mired in payment delays recently, had failed to meet the growing medical needs of public.

Now everyone has to depend on his personal purchasing capacity to avail high voltage health service in a volatile market captured by free flow multinational capital.

It is making in.

It is the basis of GDP boost and revenue management.

Just see that Media reports that Prime Minister Narendra Modi has asked for a drastic cutback of an ambitious health care plan after cost estimates came in at $18.5 billion over five years, quoting several government sources , which is resultant in delaying a promise made in his election manifesto.

On the other hand,India currently spends about 1 percent of its gross domestic product (GDP) on public health, but the badly-managed public health system means funds are not fully utilised. A health ministry vision document in December proposed raising spending to 2.5 percent of GDP but did not specify a time period.

The health ministry proposed rolling out the system from April 2015, and in October projected its cost as $25.5 billion over four years. By the time the project was presented to Modi in January the costs had been pared to 1.16 trillion rupees ($18.5 billion) over five years. That was still too much. The programme was not approved, three health ministry officials and two other government sources told Reuters. Three officials said the health ministry has been asked to revamp the policy, but work is yet to start.

In accordance the media report,the meeting was held in January and the discussions were not made public. Most amusing part of the information is that all of the sources declined to be named because of the sensitivity of the discussions.

According to media,Officials at the prime minister's office and the finance ministry, as well as the health ministry, did not respond to requests seeking comment.

However,we may still hope against hope that Modi has another four years left in his first term to fulfil the promise.

Meanwhile, health experts were dismayed when the federal budget for the full-year starting April raised the allocation for the country's main health department only by about 2 percent from the previous year, less than inflation. The meagre increase dimmed prospects for the massive health plan, they said.

Complaints are coming in from the developing world about medical devices being 'dumped' or 'sold at inflated prices' by first-world countries and trading companies.

China led the pack, instituting a probe last year, against western and Japanese medical device makers for selling dialysis kits at exorbitant prices in comparison to indigenous versions. Recently , Uganda and Nigeria complained about poorly-calibrated, old machines being dumped in their hospitals in the name of donation.

Domestic manufacturers, too, have repeatedly petitioned government officials about the need to indigenize this sector quickly for similar reasons. Indian manufacturers blame poorly-controlled Chinese companies for exporting low-priced equipment of questionable quality to this country.

"CT and MRI scanners and ventilators can be imported with zero regulation. Patient monitors and dialysis machines are brought in without regulation," said Dr G S K Velu of Trivitron Healthcare, a Chennai medical devices company. Many of these machines-some refurbished after a year's use and resold cheaper - are dumped in India, where the regulatory framework is feeble, he says.

Rajiv Nath of Hindustan Syringes and Medical Devices (HSMD), which makes single-use injections, said doctors prefer a refurbished imported machine over a new India-made one as the latter isn't certified by government. "Who do we go to for certification? Government regulates a handful of medical devices, the rest are in the unregulated sector. A known, imported brand is thus preferred," he said.

A Mumbai medical equipment vendor conceded dump ing was rampant. "Do Indian consumers know if the dialysis machine they're strapped to or oximeters checking their oxygen levels aren't new? Or whether they're calibrated to function in Indian settings? "he said.

A 2012 report in The Lancet showed that about 40% of healthcare equipment in poor countries is out of service mainly because of ill-conceived donations-for instance, oxygen concentrators donated to a Gambian hospital worked on a voltage incompatible with the country's power supply.

Contributing about 6% of India's $40 billion healthcare sector (Ficci estimate), the medical equipment sector is small but vital to the healthcare industry. Consider cardiac and orthopaedic, the sector's biggest revenue-earners. About 3 lakh Indians undergo heart procedures and around 1 lakh knee-replacement surgeries. These cost a patient between Rs 1.5 lakh and Rs 5 lakh.Each involves use of medical devices. From the high end stent or a ball-and-socket knee joint to the humble clip or blood pressure-monitoring cuff, devices play a crucial role. The US Food & Drug Administration lists 150 types of medical devices used during angioplasties and cardiac bypass surgeries and over 120 types for orthopaedic operations. The medical devices list is long, Ficci estimating about 14,000 product types. Yet few Indians ask doctors about the make of stents or intraocular lenses.

The segment in India is worth over Rs 35,000 crore."Imports account for Rs 27,000 crore and could balloon to Rs 85,000 crore soon," said a healthcare expert. Unfortunately for Indians, the Drug Controller General of India's office has regulations for only 20 devices. A new legislation widening the scope of regulation is expected this year.

Nath of HSMD said there's little awareness among Indian lawmakers that medical devices are classified into seven fields (disposables, consumable, electronics, equipment, implants, diagnostic and surgical instruments). "They club these with medicines without realizing that electronic medical devices are different from, say, consumables used in operations. Just as you wouldn't want one doctor performing your heart surgery and knee replacement, you cannot have one set of regulations for the pharmaceutical industry covering all medical devices." There's another problem: Pricing. Dr Velu said: "Many companies sell drug-eluting stents at heavy premiums. They possibly get it at Rs 5,000 to 10,000 but charge patients Rs 75,000." Nath said: "The government reduced duty on imported medical devices. Was this benefit passed on to patients? Did government check if the MRP of imported implants or stents has come down? Retailers and hospitals blackmail Indian manufacturers to maintain the same MRP as importers so they get their margins." A doctor who didn't want to be named pointed to `indirect dumping': Diversion of unwanted stocks to the third world. He said a landmark clinical trial on drug-eluting stents, COURAGE, in 2009 proved angioplasties don't necessarily help more than aggressive medical management in patients with stable coronary artery disease. " After the trial, there was drop in stent use across the US. Foreign manufacturers flocked to countries such as India to promote stent use," he said.