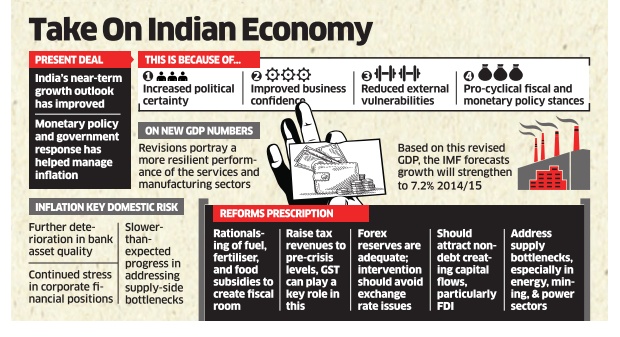 Just remember my dear friends how many times we have been questioning about the new definitions,new methods,new scales,new statics to project Indian Economy! Now IMF is also branding this budget projection of growth as NONSENSE!

The the Washington-based lender,IMF said: "To continue on this trend, India needs to revitalize the investment cycle and accelerate structural reforms."

It means more pressure from United States of America to ensure key economic reforms to sustain US Interests in the greatest Emerging Market.

India's economy is recovering and its ability to withstand external shocks has improved, but growth is likely to fall short of government targets, the International Monetary Fund said on Wednesday.

Prime Minister Narendra Modi's target of achieving 8.5 per cent GDP growth in the 2015-16 fiscal year starting April 1 may not be feasible, the International Monetary Fund said on Wednesday. Asia's third-largest economy is likely to grow at a slower pace of 7.5 per cent in the next fiscal as compared to 7.2 per cent rate in the current fiscal, the IMF said in its annual report.

Both the IMF and the government forecasts are based on new methods for calculating gross domestic product.

However, the IMF praised PM Modi's government saying India's economy is recovering and its ability to withstand external shocks has improved.

In a report on March 11, the IMF said that based on the revised GDP calculations, it estimates that the economy will grow by 7.5% in 2016. The revision has been driven by stronger investment following improvement to the business climate.

Who does manage Indian Economy?

IMF also urged the passage of reforms to land acquisition laws now before parliament; improvements in the efficiency of a state food aid scheme; greater flexibility in labour markets and improvements in education.

Is IMF dictating Indian Parliament and the sovereign status of Indian Republic?

In fact,we have no economy at all.

We have  an emerging free market which is defined as economy.

This free market economy has not to do anything with Indian State,Indian people,Indian production system,Indian business or Indian Industry.

Thus,fundamental problems have not to be addressed at all.

Budget is something like jugglery which is at its best a corporate presentation.

Free flow of foreign capital is the name of the game.

Sustenance of foreign interests is the agenda.

Selling off the Nation is the Making in.

The remote control works from United States of America.

Pardon me,the millionaire Billionaire representatives of Indian People as well as the economists at home have no idea about the real agenda and impact of  Economic Reforms.

Economics is alway explained and it is always subjective without any objectivity.

Definitions continue to be changed.

US controlled global financial institutions have to decide how Indian economy should be managed.

Foreign capital decides what should be the Budget.

FIIs have to decide what should be the Tax structure.

The development model is all about the pumping of Foreign capital in India infrastructure.

These are the trends which are best known as Economic reforms.

With 100 million people joining India's workforce in the next decade, India needs to do more to address bottlenecks in energy, power and mining, and to fix gaps in infrastructure, the IMF report said.

The Fund also urged the passage of reforms to land acquisition laws now before Parliament; improvements in the efficiency of a state food aid scheme; greater flexibility in labour markets and improvements in education.

The IMF's mission chief for India, Paul Cashin, said India's balance of payments position was comfortable thanks to a fall in gold imports and the price of oil. Investments in power and transport projects were starting to pick up.

Mr Cashin said there would be room for the RBI, which has cut interest rates twice already this year, to ease policy further and still achieve its goal of bringing down consumer inflation to 6 per cent in early 2016.

Hitting the RBI's medium-term inflation target of 4 per cent, within a band from 2-6 per cent, would be "quite a challenging target to achieve", he told a conference call with reporters, given the supply bottlenecks that constrain businesses in India.

Madhura Karnik explains the funda of the fine jugglery that has been the budget and its great ga ga glad gowth saga:The growth estimates are a bit off the mark from what India's finance ministry is projecting. In 2016, the economy will grow between 8.1% and 8.5%, the government said in February, after it rejigged how the country's GDP is calculated.

In the past, the margin between the estimates made by agencies like the IMF and the government's projections has typically been very narrow. This time, however, the difference is that of 0.5 percentage points.

Of course, the government's ambitious growth estimate has been debated—and ridiculed—lately. "Nobody really believes that the Indian economy grew at anywhere close to 7% last year, and shockingly no one is willing to put an end to this nonsense," Ruchir Sharma, head of emerging markets at Morgan Stanley Investment Management argued last month.

Still, the IMF believes that India's economy is moving in the right direction.

Pressure may be mounting on the Reserve Bank of India from within the country to lower interest rates, but multilateral lender International Monetary Fund has favoured a tighter monetary policy to bring down inflation, even as it has described the country as a "bright spot" in the world economy.

After the so-called Article IV consultations with India, the IMF has noted that policy measures to revive investment, reduce inflation, improve fiscal position and improve the ease of doing business have helped reduce India's external vulnerabilities and improve the economic outlook. "The Indian economy is the bright spot in the global landscape, becoming one of the fastest growing big emerging market economies in the world," the IMF said in a three-page ` Annual Economic Health Check' released on Wednesday along with the Article IV reports. Comprehensive consultations by the IMF economists with individual members under its country surveillance programme are referred to as Article IV consultations.The staff report prepared after the visit is then presented to the executive board, which then makes its own assessment of the situation.

Externally , the IMF noted, a surge in global financial market volatility will be the biggest risk for India while internally inflation still remains a challenge. In a surprise move, RBI had last Monday cut key policy (repo) rate by 0.25% to 7.5%, the second such surprise rate cut outside regular policy review in less than two months, but there is increasing demand for sharper cuts because of falling inflation, an assessment the IMF does not seem to agree with. "High inflation has been a key source of vulnerability, discouraging financial saving, eroding external competitiveness and exacerbating external imbalances, as well as spurring inequality ," IMF staff said in its report prepared after indepth discussions with Indian authorities.

The report added, "In the absence of supply-side measures to raise potential output and constrain food price inflation, maintaining a tight monetary stance is needed to achieve the RBI's 6.0% CPI inflation objective by 2016, particularly given the narrowing output gap and possible spikes in domestic food and fuel prices." The IMF acknowledged the fall in inflation but advised caution going forward due to supply issues, saying "in light of high inflation expectations and upside risks to inflation, monetary policy should remain tight to consolidate past gains".

Consumer Price Index based infla tion stood at 5.1% in January while wholesale price index based inflation fell to -0.4%. CPI inflation is projected to move up to about 6.25% by March 2015 and hover slightly above 6% over the course of 2015-16 as growth picks up, slack dissipates and favourable base effects unwind, the report said. The IMF expressed support to efforts to enhance the monetary framework along the lines set out in the Urijit Patel Committee Report, including increasing the operational autonomy of RBI, institutionalisation and setting the target zone for headline CPI inflation and establishment of a Monetary Policy Committee and accountability framework. The government has already signed an agreement with RBI for a monetary policy frame work and is proposing an amendment to RBI act to create a monetary policy committee. The IMF took note of the country's improved fundamentals in its Article IV consultation report. It said India's nearterm growth outlook has improved and the balance of risks is now more favourable, helped by increased political certainty , several positive policy actions, improved business confidence and reduced external vulnerabilities.

Despite the reduction in India's external imbalances and strengthening of buffers, the spillover impact from global financial market volatility to India could be very disruptive, including from any unexpected developments in the course of US monetary policy normalisation, particularly against the backdrop of recent large capital inflows, the report cautioned.

According to the report, domestic risks include a supply-driven spike in inflation, further deterioration in bank asset quality and continued stress in corporate financial positions, as well as slower than expected progress in addressing supplyside bottlenecks, which could weigh on growth and stoke inflation.

On the upside, expedited structural reforms and faster implementation of cleared investment projects could lead to stronger growth, as would sustained low global energy prices, it said.

Posted by Palash Biswas at 6:56 AM