Identity Politics destroyed the Left! Unless you come down to streets,No Brigade rally,No Jantar Mantar would help you Comrade! 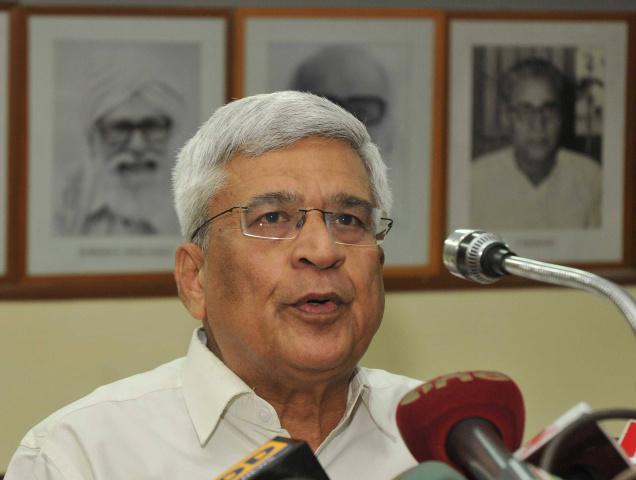 No doubt,it has been a big big Brigade Rally yet again in Kolkata and considering the redland erosion,it is a rare show of strength.

Just trace the history history of Marxist Leninist Movement in India which had been deep rooted in agrarian uprising.

As the neoliberal children took over India,the Left also disassociated itself from agrarian Inda and forgot the question of land reforms.Rather,it engaged itself in land Dacoity running on the highway of capitalist develpment.

Just remember the Telengana uprising, the Tebhaga Movement,the Food movement which made the Left most relevant phenomenon.Specifically Bengal became the epicentre of Left Politics just because of this agrarian base.

The left lost the land just because it disassociated itself from land reforms which installed it in Bengal Governance no less than thirty four years.

Rather,the Left forgot the agenda of change,change in the Rajya Tantra.The class struggle has been abandoned for identity politics to sustain the Left governments in Kerala,Bengal and Tripura at the cost of the Left movement in the rest of the country.Rather the Left has been immersed in identity politics.

Comrade,this identity politics at the cost of class polarization destroyed the Marxist Leninist movement in India.

Communist Party of India-Marxist general secretary Prakash Karat also stressed on the need for consolidating left unity and presenting a left and democratic alternative before the country.

"Since the BJP-led government came to power nine months back, we are seeing rightist attacks. The big capitalists and corporates are behind this attack.

"With them are the hindutva communal forces led by the RSS (Rashtriya Swayamsevak Sangh), who are not only supporting this government,A but also actively pursuing their communal agenda," CPI-M general secretary Prakash Karat told a huge rally in Kolkata.

For twenty three years, Left had been engaged in vote bank equation based on caste and identity politics.It aligned itself with Lalu ,Mulayam and Mayabati all on the name of equality and social justice but sustained the elite leadership ejecting out the SC,ST,OBC and Minority representation.

The Left despite ruling Bengal for thirty four years neither could implement land reforms nor it did try to do anything for the annihilition of caste.It passed its so much so hyped dalit agenda way back in Hyderabad conference,but could not accomplish the task.

Neoliberalism is Hindutva phenomenon and the ruling hegemony in the centre always had been a Hindu Imperialist hegemony.It could have been broken with class polarization beyond identities.The left chose identities and never did try for class polarization and forgot class struggle.

Accusing the BJP-led central government of targeting the minorities and working for the interests of the corporates and foreign capital, the CPI-M on Sunday called for a united movement of left and democratic forces against the neo-liberal policies and communal agenda of the Narendra Modi government.

"With them are the hindutva communal forces led by the RSS (Rashtriya Swayamsevak Sangh), who are not only supporting this government,A but also actively pursuing their communal agenda," CPI-M general secretary Prakash Karat told the  huge Brigade rally.

Pardon Comrade!The Shafron corporate Hindutva RSS Raj is the extension of neoliberal Hindutva practiced by Congress with whom the Left opted for Honeymoon until the Indo US Nuclear deal was operationalised.

Just because of the Honeymoon with the ruling Hegemony in the centre,the Left opted for Big Big Rallies and limited the Leftist movement in Brigade Rallies and jantar Mantar.The Left had the monopoly in trade unions.Even now the Left rules the trade union movement.But the Left could not use the strength of either Kisaan Sabha or trade unions in resistance of economic ethnic cleansing on the name of capitalist development.

The Left supported the citizenship amendment act, the mother legislation which opened up the floodgates of all reforms.

All these years after the Left government led by Comrade Jyoti Basu sworn in Bengal,we never saw the left on the streets.We never witnessed yet another Tebhaga or food movement.No Leftist leader speks anything on land reforms or class struggle.Only the Maoinsts speak on class and class strugle.

"They had promised to stop price rice. But now every day we see food prices spiralling. Condition of peasants is so bad, they are committing suicides. They (the government) want to change labour laws to deny workers the protection they enjoy now under the Labour Act."

"The Modi government wants to implement a neo-liberal agenda. In the interests of the peasants, workers and the toiling masses we have to come together to resist and oppose the moves."

It has to be noted that the Brigade Rally was not meant to initiate whatsoever resistance against the Hindu Imperialist Regime in the centre.Nor the leaders of the party focused enough on the basic issues,the plight of the masses.

Rather the leadership targeted the minority Vote bank as accusing the Rashtriya Swayamsevak Sangh (RSS) and other Hindutva forces of fanning communal fire in the country, general secretary of the Communist Party of India (Marxist) Prakash Karat said here on Sunday that the issue of cow slaughter was being raised to target the minorities in the country.

I am afraid that the exercise is futile as the Minorities in  Bengal as well as in the rest of the country are victims of religious polarization and religious persecution.They have the only escape route which leads them to support the winning combination against the cent percent Hindutva.

The Left is no more a winning combination against RSS.

Mr. Karat called for strengthening of the CPI(M) and pointed out that unless the party was made strong, the Left forces will not be able to confront the "neo-liberal and communal forces".But Comrade general secretary and other leaders defocused the economic issues with their engagement in vote bank equation to defeat TMC led by Mamata Banerjee.

Taking on the Trinamool Congress (TMC) government in West Bengal, the CPI(M) leader said that the government was known in the rest of the country for scams.

"This is not a Trinamool Congress government but a ghotala (scam) Congress in the rest of the country. Be it the Saradha scam or any other scam…," he said.

Mr. Karat also blamed the TMC for providing an opportunity to the BJP to make inroads in West Bengal. "In the 24 years, the CPI(M) and Left Front was in power there was no place for the BJP and the RSS in Bengal," he added.

Referring to the huge turnout at the rally, the CPI(M) general secretary said those who said that the CPI(M) and Left Front were on its way out in Bengal should take a note of the lakhs of people gathered here.

"Our party -- the CPI(M) and Left Front -- is on firm footing here to take on the gundaraaj and corruption of the TMC and the communal politics of the BJP," Mr. Karat added.

Addressing the  huge gathering at the open rally called in connection with the CPI-M's West Bengal state conference beginning on Monday, Karat said the "RSS and the hindutva brigade" are stoking the communal fire across the country.

"At various places, attacks on minorities have intensified. They raise the issue of cow slaughter to target the minorities. In some areas there have been forced conversations. They are preparing programmes to reconvert christians and muslims into hindus.

Describing the "communal danger" as a danger for the country and the unity of masses, Karat said: "We need to rally the left and democratic forces to launch our fight against the communal and neo-liberal agenda of the government and hindutva brigade."

Karat said the CPI-M will finalise its programme on these issues at its party in Vishakhapatnam next month.

"In this Congress, the CPI-M will finalise its political line and direction so as to face the challenges before the people and the country in the present context.

"The Congress will give the roadmap on how the party can go forward with strength and consolidate left unity to present a left and democratic alternative before the country," he added.