“Towards a World War III Scenario” by Michel Chossudovsky

“Towards a World War III Scenario” by Michel Chossudovsky

The World is at dangerous crossroads. Breakdown of international diplomacy, evolving crisis in Ukraine and the Middle East: “In a world where engineered, pre-emptive, or more fashionably “humanitarian” wars of aggression have become the norm, this challenging book may be our final wake-up call.” –Denis Halliday, Former Assistant Secretary General of the United Nations
Following the highly acclaimed 2012 release of the latest book by Prof. Michel Chossudovsky, “Towards a World War III Scenario: The Dangers of Nuclear War“, this title is now available for purchase through the Amazon Kindle program! Now you can take this bestselling title wherever you go and access it through your portable reader.
This highly reviewed title is available to purchase through the Global Research Online Store:
Click to visit Online Store
Ordering from Canada or the US? Save on bulk orders of “Towards a World War III Scenario”:
3 copies for $25.00
10 copies for $65.00
Save on shipping costs and purchase a PDF copy of this title for only $6.50!
Click to purchase PDF directly from Global Research
Kindle listing of Amazon: “Towards a World War III Scenario”
The US has embarked on a military adventure, “a long war”, which threatens the future of humanity. US-NATO weapons of mass destruction are portrayed as instruments of peace. Mini-nukes are said to be “harmless to the surrounding civilian population”. Pre-emptive nuclear war is portrayed as a “humanitarian undertaking”.
While one can conceptualize the loss of life and destruction resulting from present-day wars including Iraq and Afghanistan, it is impossible to fully comprehend the devastation which might result from a Third World War, using “new technologies” and advanced weapons, until it occurs and becomes a reality. The international community has endorsed nuclear war in the name of world peace. “Making the world safer” is the justification for launching a military operation which could potentially result in a nuclear holocaust.
Nuclear war has become a multibillion dollar undertaking, which fills the pockets of US defense contractors. What is at stake is the outright “privatization of nuclear war”.
The Pentagon’s global military design is one of world conquest. The military deployment of US-NATO forces is occurring in several regions of the world simultaneously.
Central to an understanding of war, is the media campaign which grants it legitimacy in the eyes of public opinion. A good versus evil dichotomy prevails. The perpetrators of war are presented as the victims. Public opinion is misled.
Breaking the “big lie”, which upholds war as a humanitarian undertaking, means breaking a criminal project of global destruction, in which the quest for profit is the overriding force. This profit-driven military agenda destroys human values and transforms people into unconscious zombies.
The object of this book is to forcefully reverse the tide of war, challenge the war criminals in high office and the powerful corporate lobby groups which support them.

Editorial Reviews
Professor Chossudovsky’s hard-hitting and compelling book explains why and how we must immediately undertake a concerted and committed campaign to head off this impending cataclysmic demise of the human race and planet Earth. This book is required reading for everyone in the peace movement around the world.
–Francis A. Boyle, Professor of International Law at the University of Illinois College of Law
This book is a ‘must’ resource – a richly documented and systematic diagnosis of the supremely pathological geo-strategic planning of U.S. wars since 9-11 against non-nuclear countries to seize their oil fields and resources under cover of “freedom and democracy”.
–John McMurtry, Professor of Philosophy, Guelph University 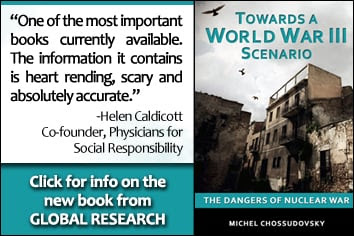 About the Author
Michel Chossudovsky is an award-winning author, Professor of Economics (Emeritus) at the University of Ottawa. He is the Founder and Director of the Centre for Research on Globalization (CRG), Montreal, and Editor of the globalresearch.ca website.
He is the author of The Globalization of Poverty and The New World Order (2003) and America’s “War on Terrorism” (2005).
He has taught as Visiting Professor at universities in Western Europe, South East Asia and Latin America, acted as an adviser to governments of developing countries and as a consultant for the several international organizations.
Prof. Chossudovsky is a signatory of the Kuala Lumpur declaration to criminalize war and recipient of the Human Rights Prize of the Society for the Protection of Civil Rights and Human Dignity (GBM), Berlin, Germany. He is also a contributor to the Encyclopaedia Britannica. His writings have been published in more than twenty languages. In 2014, he was awarded the Gold Medal for Merit from the Republic of Serbia
To leave a review for this title on Amazon
“LIKE” this book’s fan page on Facebook!