CHENNAI: Tamil Nadu chief minister J Jayalaithaa has taken on Prime MinisterManmohan Singh and Congress presidentSonia Gandhi.  Jayalalithaa has sought explanation from the top UPA leadership on DMK leader A Raja's charge in the 2G spectrum scam.  TheAIADMK chief has also targeted home ministerP Chidambaram.  Jayalalithaa's salvo is in contrast to the initial bonhomie expressed by both sides after her massive victory in the state assembly elections.
http://economictimes.indiatimes.com/news/news-by-industry/telecom/jayalalithaa-seeks-explanation-from-pm-sonia-in-2g-scam/articleshow/9422379.cms
2G: A Raja's PS accuses CBI of pressurising witnesses to depose
R K Chandolia, former private secretary of A Raja, on Saturday alleged before a Delhi court that theCBI pressurised its witnesses to depose against him in the 2G spectrum case after his arrest.  "My arrest on February 2, this year was illegal because at that point of time, no prosecution witnesses had deposed against me and CBI, in a bid to frame me, pressurised them to name me as accused," Chandolia's counsel Vijay Agarwal told Special CBI JudgeO P Saini.  Agarwal, who concluded his two-day-long arguments on framing of charges, claimed innocence saying all the persons, who have either been left out or being made witnesses, should have been before the court as accused.  Department of Telecom (DoT) official, R P Agarwal, who recorded his statements on various dates with CBI, did not name Chandolia and suddenly, he named the private secretary in his testimony, recorded after the arrest and this reflected the motive of the agency to implicate him, the counsel said.  "In January and February, the statements (of Agarwal) were recorded and no role was attributed to Chandolia. When his statement was recorded in March, the name of Chandolia surfaced....I am the smallest pie and why they arrested in February when all the incriminating statements were recorded in March."  "CBI first prepared the draft charge sheet and aligned it later after manipulating the statements of witnesses to suit its case," Agarwal said.  Earlier, Chandolia followed the line of defence of the former Telecom Minister and continued with the blame game by seeking to implicate Tata and corporate lobbyist Niira Radia and others as accused on the ground that it was they who had felicitated the deal to bring DMK-run Kalaignar TV on Tata Sky bouquet.
2G scam will die its own death: Chandolia
The second generation (2G) spectrum allocation scam will die its own death like the mid-1980s Bofors gun deal scandal, jailed former communications minister Andimuthu Raja's ex-personal secretary R.K. Chandolia told aCentral Bureau of Investigation (CBI) special court here Saturday.  Chandolia's counsel said in the beginning of the Bofors deal scandal, there was a huge "hue and cry" but the case died its own death.  "Similar is the situation in the 2G case. It will also die its own death," Chandolia's counsel toldCBI Special Judge O.P. Saini.  He claimed that the probe agency gave him the choice of becoming a witness or an accused in the case.  Defending himself, Chandolia said he was not the decision making authority for spectrum allocation.  "I was assisting my minister. Can an assistant ask his lord what decision have you made. I am not concerned whether their decision is right or wrong. I am no one, just a pawn in the chess game. I challenge the CBI. Let them show one sign on a single document. There are a number of people who have signed on papers but the CBI has not called them in," said Chandolia.  "I am like a child, who is asked to deliver the bag to someone. I have only done that, then what is wrong in it. Why should I be prosecuted?" defence counsel asked.  "I was used by the minister (Raja)...I used to carry out his instruction," said Chandolia, concluding the arguments on the charges levelled against him.  "The CBI should prove where have I forged any documents to favour Swan (Telecom) or Unitech (Wireless," said Chandolia.  "In the Delhi circle, Swan was given preference as due to the Idea and Spice merger, they were not eligible," he said.  Chandolia said his arrest Feb 2 was illegal as nowhere did the witnesses' statements recorded by the CBI in January and February showed his involvement.  "His name only figured in the statements in the month of March," said defence counsel, adding that how was it possible that the same witness gave two different statements.  "The CBI manipulated the charge sheet with a predetermined mind to prosecute me," Chandolia said.  He said the CBI showed a loss of Rs.30.000 crore to the exchequer in spectrum allocation but there was no word on the loss caused by him.  "I do not know the amount of loss I caused to the government of India, for which I am prosecuted," said Chandolia, adding that since he had been charged with cheating he must be told about the loss allegedly caused by his actions.  Chandolia is currently lodged in the Tihar Jail along with 13 others involved in the case.  Swam Telecom promoter Shahid Usman Balwa would begin his arguments on charges Monday.

If I committed crime, so did Tatas and Radia, says A Raja's ex-personal secretary RK Chandolia
Targeting theTatas and lobbyist Niira Radia, former communications minister Andimuthu Raja's ex-personal secretaryR.K. Chandolia on Friday said if he could be accused in the2G spectrum scam, so should they.  Chandolia began his arguments opposing charges against him, saying that he was a government official who was following the order of his superiors.  "The deal took place between Radia and the Tatas, they are not in jail, and my client who is not involved is in the dock," Chandolia's counsel Vijay Aggarwal told CBI Special Judge O.P. Saini.  "If a crime is done by my client, then Tata and Radia are also on equal footing," he stressed.  Counsel argued that Chandolia only followed Raja's orders. "It was Raja who took Niira Radia's help. My client just followed the orders."  "Radia called the office that time, my client picked up the phone and she wanted to speak to Raja. As he was not there, she asked him to tell Raja that the KTV problem has been sorted out," said Aggarwal.  "My client only conveyed what happened, how can he be a conspirator?" he asked, adding that there were no recorded conversations of Chandolia.  Counsel also targeted Aseervatham Achary, an alleged associate of Raja and a prosecution witness, who was said to have conspired to bring Kalaignar TV on Tata Sky DTH bouquet by acting as a conduit between Raja and Radia.  "In the conversation tapes whenNiira Radia referred to the deal, nowhere does Achary ask her what was she talking (about). This clears that he was aware of the deal between Kalaignar TV and Tata being pursued by Raja," Aggarwal said, questioning the court why Tata, Radia and Achary are not made accused.  He added that it was Achary who has been associated with Raja for the past 12 years.  "Achary helped in cracking the deal between Radia and Tata...then why he is not in jail?" Aggarwal asked.  Counsel also questioned the CBI's role. "We all know that CBI is the most clean agency, but it does not have guts to touch the Tatas and Radia."  He added: "They roped my client because after almost a year of investigation, the CBI bargained with other officials saying that either you become a witness and depose against Chandolia or be an accused."  Aggarwal asked the court how can Chandolia be accused of conspiring with Raja in connection with two letters.  "Writing an incriminating letter, dictated by Raja, is my offence?" he questioned.  He added that both the information officers (IO) have two different submissions on Chandolia's presence - one saying Chadolia was present, and the other denying it - when the letter was typed, thus their testimonies were contradictory.  He also asked the court as to why the court and the prosecution endorses everything that CBI does.  Denying the CBI's allegations that Chandolia had threatened R.P. Aggarwal, the wireless planning and coordination wing chief, to ensure spectrum is granted to Swan Telecom, counsel said: "These are baseless allegations. Aggarwal was senior to Chandolia...how can he direct him?"  "R.P. Aggarwal had all the powers to allocate the licenses. He was involved in the conspiracy, not Chandolia. He should be in jail."  Counsel further told the court that his client was a personal assistant to Raja and had no major role to play.  In addition, counsel submitted that Chandolia is not a person associated with the DMK, Kalaignar TV or any other telecom company.  "He is a small poor man who doesn't even had the signing authority," he added, challenging the CBI to show a single document in the charge sheet with Chandolia's signature.  Chandolia's arguments began Friday, opposing framing of charges against him.  Before counsel began his arguments, the court dismissed Chandolia's plea that sought interim bail on the ground that the CBI lacks proper sanction to prosecute him.  Chandolia is lodged in the Tihar Jail along with Raja.

More stories from this edition of Spectrum Scam

Spectrum Scam
The Public Accounts Committee(PAC), which has been pressing ahead with its schedule of summoning corporates, lobbyists, journalists, and senior bureaucrats, has decided to finalise its report by this month-end.
30 July 2011 Last updated at 18:53 GMT 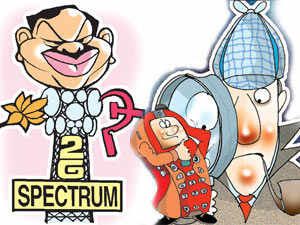 If I committed crime, so did Tatas and Radia, says A Raja's ex-personal secretary RK Chandolia
Targeting the Tatas and lobbyist Niira Radia, former communications minister Andimuthu Raja's ex-personal secretary R.K. Chandolia on Friday said if h...2G scam: Now, Sidhharth Behura links PM Manmohan Singh to scam
Behura endorsed A Raja's claims that Singh had been informed of all key decisions relating to allotment of mobile permits and airwaves to new telcos i...2G scam: IT questions Raja, others; to come out with report soon
Income Tax Department today said that it has questioned former Telecom Minister A Raja and others in connection with the 2G spectrum allocation case a...

Posted by Palash Biswas at 7:11 AM