SPECIAL EDITION Bludgeoned By Water A calamity tests the mettle of the people of the hills, the faith of pilgrim-tourists ANUBHA BHONSLE 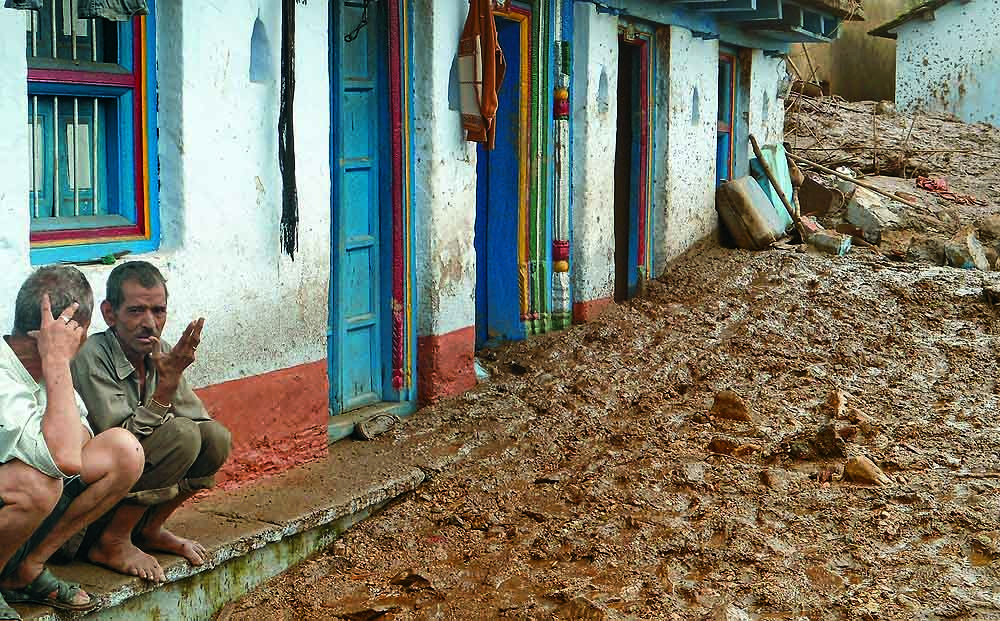 AFP (FROM OUTLOOK 01 JULY 2013)
Drowned in brown Villagers sit outside their homes in a mud-inundated street
SPECIAL EDITION
Bludgeoned By Water
A calamity tests the mettle of the people of the hills, the faith of pilgrim-tourists
ANUBHA BHONSLE
http://www.outlookindia.com/article.aspx?286324

A natural disaster but a man-made catastrophe

How everybody looked the other way

Why the 'ragad-bagad' happened this year

Why the scale of devastation is so huge

Death & devastation: The official death toll stands at 150+, but a reasoned estimat ion warns the final figure could run into the high hundreds and could even touch the thousands

It's 5 a.m. The Jolly Grant airport looks like a missing persons bureau. From the early hours, when security personnel were changing duty rounds, young and old men have been arriving at the airport. In their hands, they hold pictures. Some are carrying passport-size photographs of loved ones missing in the floods. Others are holding up group photos of relatives or friends on vacation. Many of those stranded in the hills are pilgrim groups from across the country, groups of 20, 30, and in some cases even up to 70 people—family members, friends, people from a neighbourhood, who had got together to make the char dham yatra or pilgrimage to the four holy spots, Gangotri, Yamunotri, Badrinath and Kedarnath. Many of the pilgrims are elderly. This is not an Uttarakhand tragedy; it is a nationwide tragedy. For there are pilgrims from Andhra Pradesh, Assam, Tamil Nadu, Gujarat, everywhere.

A young man has come with his uncle from Akola in Maharashtra. His father and mother had saved up for the char dham yatra. They were barely metres away from Kedarnath when tragedy struck. Gangadhar Pandey, who managed to survive with his entire family,  spoke of cars being washed away in a gush of water. He has been lucky. Some folks have heard by SMS from their relatives stranded in the hill towns and pilgrim centres. Those at home are relieved that they will be back soon. 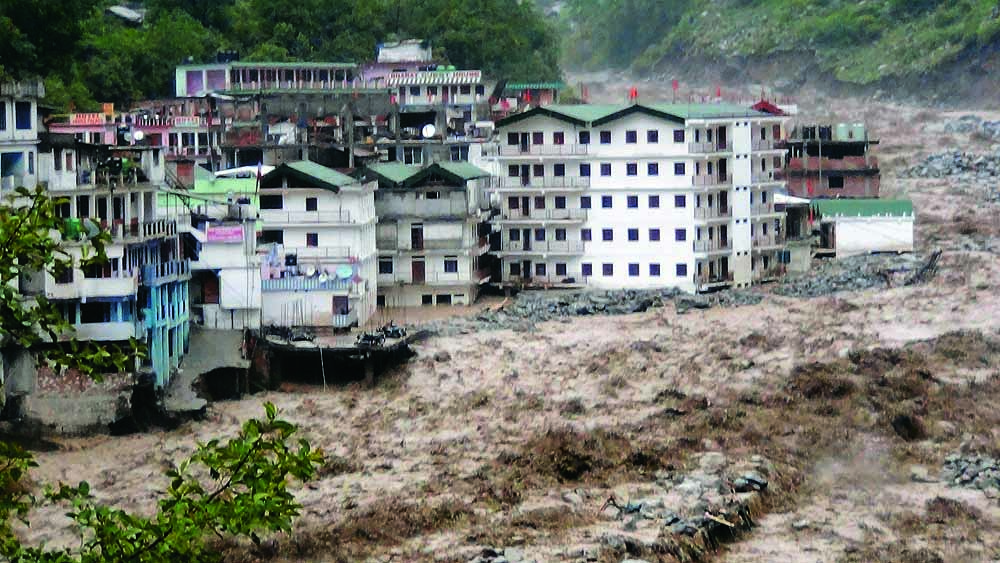 A river takes back The Alaknanda swamps structures built on the riverbed in Govindghat. (Photograph by AFP, From Outlook 01 July 2013)

Not many people want to talk about the dead, about what happens to the dead bodies, of how to account for people whose bodies have been washed away. The official toll, at the time of going to print, stood in the low hundreds, but is likely to touch many hundreds, and some are talking in terms of thousands. Rescue is focused on evacuation and quick transport of those requiring medical help to hospitals. Many survivors have painful memories, of horrors unimaginable at pilgrimage sites. Survivors say the Kedarnath temple has suffered heavy damage, and its gateway is full of debris. They speak of houses and hotels in the vicinity submerged by slush and mudslides.

Since lots of roads have been washed away, rescue workers are trying to create temporary roads, bridges, and even small pathways to bring stranded people down. A hundred army jawans and officers have slithered down to Gaurikund with basic needs, food, medicines etc. They will spend the next few days with those stranded there, keeping their morale up.

The return home hasn't been immediate for many. But those who managed to get a sortie back to towns like Dehradun consider it a miracle that they have survived. Full recovery is going to be a long haul. The char dham yatra is likely to remain suspended for a year. Even evacuation is likely to take a few more days. But evacuation of those in need of medical care will be completed immediately.

It's a herculean task for the armed forces. Their choppers have flown sorties every minute of good weather; on the ground, personnel have worked round the clock, reaching cut-off areas, clearing slush. Air Commodore Issar, who is in charge at Jolly Grant airport, says his choppers have done 50-60 sorties on good days, shuttling about five persons each time.

For the Hindu faithful, the char dham yatra has regained its true sense of awe. Ditto for the Sikh pilgrims to Hemkund Sahib. But it will also mean a return to faith with even greater strength, for having faced nature's fury at its worst and survived miraculously.

By Anubha Bhonsle in Dehradun, Haridwar and Guptkashi

(The writer is a senior editor with CNN-IBN television.)

Posted by Palash Biswas at 7:36 AM