NATYA Swapno Bhang! Written by Bibhas Chakrobarti on Contemporary Bengali Theatre and My point to to revive the centrestage which we surrendered! Palash Biswas

Written by  Bibhas Chakrobarti on  Contemporary Bengali Theatre and My point to to revive the centrestage which we surrendered!

Pardon me ,I am perhaps trespassing an arena to which I myself do not belong! But Bengali Daily,Ei Samay published an article on contemporary Bengali Theatre which is divided on party line and lost its way.It is writen by very well known BibhasChakrobarti.

It is an issue which should be addressed.

Earlier, I wrote an open letter to our Film Maker friends suggesting that the format should be changed so that we may screen the films most relevant anywhere anytime  on Nukkad.Drama made its way thanks to the legends like Habib Tanveer,Ratan Thiam and Safdar Hashmi adjusting with changing time

I am very much influenced by my dearest film Maker  friend Joshi Joseph who in very very short format exposed the North East social realism under AFSPA.

As I wrote that Anand Patwardhan also should opt for shorter format,it was ironically,the master of the shorter format,my friend Joshy Joseph reacted very strongly and commented that it was not my medium.So my friends engaged in Cinema for Resistance think the same way.

Meanwhile,Anand Teltumbde had called me and informed that Patwardhan was coming in Kolkata Festival of Cinema of resistance and we did plan  to have a discussion with Anand.As Teltumbed also favours my opinion that performing should be the medium in which we might break the sackles!

But ,I decided not to share my opinion with patwardhan this time and opt to wait for proper time when our friends would understand the need and urgency of performance beyond medium and genre.Since I am not an Icon and my friends,most of them are icons,I dare not discuss the issue!

In wardha,Nisar Khan,raviji and some of the young cinema and theatre students like Bhagwatji,Kumar Gaurav and Majdoor Jha and other students including the intelligent and brillient  girls engaged in M. Phil and PHD studies endorsed my opinion that we should break some new ways in Cinema as well as Drama just because the PRINT has become quite irrelevant and and social media and the alternative media may not be sustained in absolute power.

Contemporary Bengali Theatre should be seen as a case study as IPTA did coordinate every genre,medium and form of art and culture.

I hope that I should not explain it and it may be tracked in the history of Indian cinema.

The most relevant writer of resistance in our time,I am referring to Nabarunda also rooted in theatre and every piece of his work might be reproduced in Cinema and Theatre.The writing itself is nothing less tahn performance.

Bibhas Chakrobarti had been the face of the Pariwartan as Bengali Theatre played the key role to mobilise the intelligentsia against Nadigram And Singur Land acquisition followed by Nandigram firing.Anoteher thetre personality Arpita Ghosh was coordinating the processions on streets.Kaushik Gaanguly also played key role at the time.

Only Naandikar and Rudra Prasad Sengupta never did come out against the Left regime as far as I remeber.

In fact, I was disappointed to see his very very loud performances and DISLIKED the track change of Bengali theatre from the path created by centuries old apolitical commitment to the masses,social realism and the conscience and activism to stand against the absolute regime.

IPTA was the centre stage of all art forms which produced so many personalities like Somnath Hore,Sailil Chowdhari,Debbrata Biswas<Bijan Bhatacharyand his family including the mother Mahashweta Debiand her son.I am skipping all other instances of all India phenomenon of IPTA movement.

The ideology had not been translated in power politics and it made IPTA so much so relevant.

It remained the centre stage of Indian mass movement just because it never did surrender to absolute power which inflicted contempoarary Bengali Theatre.

I hope that this article should be translated in other languages to understand where we stand.

My point is have to revive the centrestage which we surrendered!

Indian People's Theatre Association (IPTA) was an association of leftisttheatre-artists under the Left parties. Its goal was to bring cultural awakening among the people of India.[1] It was the cultural wing of the Communist Party of India.[2]

Some of the initial members of the groups were Prithviraj Kapoor, Bijon Bhattacharya, Ritwik Ghatak, Utpal Dutt, Khwaja Ahmad Abbas, Salil Chowdhury, Pandit Ravi Shankar, Jyotirindra Moitra, Niranjan Singh Maan, S. Tera Singh Chan,Jagdish Faryadi, Khalili Faryadi, Rajendra Raghuvanshi Safdar Mir etc. The group was formed in 1942, in the background of the Second World War, with Bengal famine of 1943 and starvation deaths in India on the one hand and repression by the colonial masters in the wake of the Quit India Movement and the aggression by the fascist powers on the Soviet Union on the other. All India People's Theatre Conference was held in Mumbai in 1943 where the group presented its idea and objective of representing the crisis of the time through the medium of theatre and to help people understand their rights and duties. This conference led to the formation of committees of IPTA across India. The movement hit not only theatres, but also cinema and music in Indian languages.

The most important of the dramas were Nabanna (Harvest). Nabanna is a folk-cultural festival of Bengal to celebrate the harvest. This Bengali drama, written by Bijon Bhattacharya and directed by Sombhu Mitra, portrayed the evils of the Bengal famine of 1943 and the alleged indifference of the British rulers, as also of the richer strata of Indian society towards the plight of the millions dying from the famine.

Nava Jiboner Gaan (Song of New of Life) by Jyotirindra Moitra and the film Dharti Ke Lal (Children of the Earth) by Khwaja Ahmad Abbas followed Nabanna in addressing the needs of the people. These performances were characteristic for their vivid, stark portrayal of the suffering of the masses. Similar productions were carried out all over India, like Desha Sathi inMarathi which was about the attack on the Soviet Union by Nazi Germany; Prarambham in Telugu; and Zubeida directed byBalraj Sahni and based on the story of a Muslim girl from Malabar. Manikuntala Sen, the fireband woman of left politics acted in this play along with Gopal Halder, who later became an educationist. 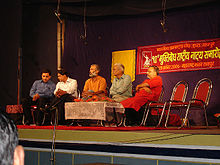 The group were dispersed in 1947. However, the main members continued to carry the legacy of IPTA by forming several groups with similar ideology. Ahindra Chowdhuri, Sombhu Mitra and Tripti Mitra were the leading members of the groupBahurupee. Raktakarabi, Tahar Nam Ti Ranjana, Char Adhyay (written byRabindranath Tagore) were some of the earlier productions of Bahurupee. Utpal Dutt led another faction of artists and went to create classics like Tiner Talowar andKallol. IPTA Mumbai was another offshoot that has existed over the last six decades and continue to produce dramas till date.[3] IPTA offshoots exist in other parts of India as well.[4]

Group theaters like Nandikar, Spandan of Kolkata still produce their dramas often in the line of the IPTA movement, and recently there has been effort to start a similar movement inspired by the IPTA.[5]

IPTA Raigarh was established in 1982 during the first state conference of IPTA which was organized by the Raigarh unit in 1982. Since then Raigarh unit has been active and practicing theatre in this small district of Chhattisgarh (earlier Madhya Pradesh).

In 1994, when the Golden Jubilee of IPTA was celebrated nationwide, this unit decided to celebrate the Golden Jubilee by organizing a five day theatre festival during the month of December. Although meant to be a one-off event, it was very well received and later on, it was decided to continue this as an annual event. This is how the National Theatre Festival was born and conceived.

In 2001, IPTA Raigarh registered itself as 'IPTA Center for Cultural Resources and Training' with the Registrar of firms & societies, Government of India.

"IPTA Center for cultural resources & training" has emerged as one of the pro-active theatre groups in Chhattisgarh State.

Artistes of the group, including child artistes, have acted in a film "Chutakan Ki Mahabharat" produced by Children's Film Society Of India and Directed by Sankalp Meshram, which has bagged the National Award for the Best Children's Film in 2005, conferred by the Government of India.

IPTA Raigarh also publishes its annual Magazine "Rankarm" which is endorsed by Kendriya Hindi Nideshalaya and is being distributed throughout the country with the help of the same. This magazine has been published annually since 2003.

The Indian People`s Theatre Association (IPTA) movement in Punjab greatly altered the theatre as it was reoriented toward playing a greater role as an instrument of social change. The IPTA movement in Punjab brought out artists like Shiela Bhatia, Balraj Sahni, Balwant Gargi, Niranjan Singh MaanTera Singh Chan, Joginder Bahrla, Pandit Khalili, the Theatre workers, Parkash Kaur, her younger sister Surinder Kaur, and Amarjit Gurdaspuri the famous folk singers in the service of people's concerns. They made serious efforts to take Punjabi theatre and folk culture to the masses.

Posted by Palash Biswas at 7:21 AM