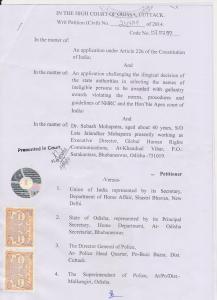 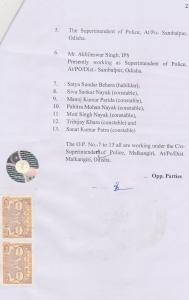 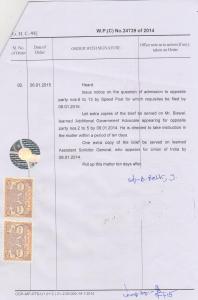 Acting a petition filed by rights campaigner Subash Mohapatra of the Global Human Rights Communications, Orissa High Court issued notice over the illogical action of the state authorities in recommending the names of ineligible persons to be awarded with gallantry awards violating the norms, procedures and guidelines of NHRC and the Hon'ble Apex court of India.

The court issued notice to Home Secretaries of Government of India and Odisha state Government and director general of police-odisha, SP Sambalpur and six others and asked to reply within ten days.

On 14th August 2014, the Ministry of Home Affairs of the Government of India announced police medals on the occasion of Independence Day -2014. Out of the total 15 recipients for President's Police Medal for Gallantry, eight police officers from Malkangiri in the state of Odisha were recommended to be awarded with the said medals. The awardees are named as Mr. Akhileswar Singh (SP, Malkangiri), Satya Sundar Behera (habildar), Siva Sankar Nayak (constable), Manoj Kumar Parida (constable), Pabitra Mohan Nayak (constable), Moti Singh Nayak (constable), Tribijay Khara (constable) and Sanat Kumar Patra (constable). The said announcement confirmed that the state police bagged the maximum number of awards in the category of President's police medal for gallantry (PPMG) in the country. It is scheduled to be delivered on 27th January 2015.

In the case of PUCL VS State of Maharashtra (Criminal Appeal No. 1255 of 1999), the Hon'ble Supreme Court of India issued the 16 points requirements to be followed in the matters of investigating police encounters in the cases of death as the standard procedure for thorough, effective and independent investigation, and in guideline no. 15 reads as under: (15) "No out-of-turn promotion or instant gallantry rewards shall be bestowed on the concerned officers soon after the occurrence. It must be ensured at all costs that such rewards are given/recommended only when the gallantry of the concerned officers is established beyond doubt".

The Guideline in case of deaths caused in police action issued by NHRC (which is deemed to be a civil court) on 12 May 2010 prohibits out of turn promotion or gallantry awards. The NHRC Guideline (f) states, "No out-of-turn promotion or instant gallantry rewards shall be bestowed on the concerned officers soon after the occurrence. It must be ensured at all costs that such rewards are given/recommended only when the gallantry of the concerned officer is established beyond doubt".

"The judgment of the Supreme Court  being the law of land are to be complied to their letters and spirit by all concerned. Article 141 of the Constitution of India commands that the order of this Hon'ble Court being the law of the land is binding on all authorities in the territory of India. The above sated judgments which are being flouted by the contemnors being the judgment in-rem, were required to be implemented to the benefit of all and for ensuring judicial sanctity and sovereignty", stated Mohapatra, the petitioner. I have also moved a contempt petition before Odisha High Court, he added.

Earlier, Mohapatra had complained before the Home Secretary of the government of India and other appropriate authorities requesting not to confer the awards on the alleged officers as it will bring disrepute to the sanctity of the president's office of India.

Posted by Palash Biswas at 9:16 PM